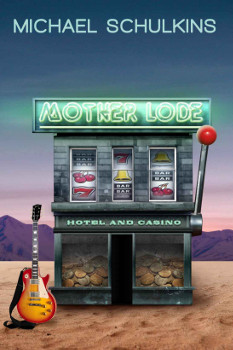 Everybody’s going nuts over the Biggest Slot Machine in the World. Octogenarian skinflint Elmore Joad thinks it will attract enough “suckers” to put his aging Mother Lode Hotel and Casino back in the black, especially since he’s had the giant slot rigged never to hit the million dollar jackpot. Part time guitarist and full time slot cheat Darryl “the Wire” Miller wants to beat the big machine in the worst way, and if he plays his cards right he may get Kitty Carson, Reno’s best card mechanic, to help him do it. Then there’s Gaming cop Jaime Gabrón, who’s stalking the suspicious slot and Elmore Joad like a sun-baked refried Columbo. The only guys in town not interested in the big machine are the two hit men Joad hired to kill his sexy wife Daisy, but then they have some special plans of their own…

Put a dollar in the slot, pull the handle, then try to follow the action as the plots start to spin out of control. Mother Lode delivers a jackpot of laughs, surprises, suspense, and deadly fun as a pack of charming, ruthless, and insane characters all try to beat the Biggest Slot Machine in the World.