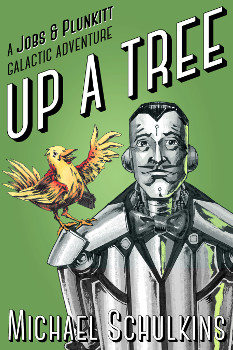 Up A Tree: A Jobs & Plunkitt Galactic Adventure

A planet on strike, an alien love triangle, and a giant politician-eating artichoke: Galactic Senator Plunkitt is, literally and figuratively, up a tree.

The trouble began when Plunkitt's old school chum Flotsam Drang--a startlingly malodorous Denebian with an insatiable appetite for the pleasures of the flesh--set his eye-stalks upon the worst possible paramour: the secret tweet-heart of the planet Tree's most powerful bird.

This unlikely rivalry soon draws Plunkitt into a thicket of insider trading schemes, labor negotiations, and political skulduggery as dense and impenetrable as the rapacious jungles of Tree itself. But it's the Senator's own knack for turning a bad situation worse that lands him, Flotsam, and Tree's favorite tweet-heart in deadly peril.

Naturally, it falls to your humble narrator Jobs, armed only with a million-credit brain and a ten-credit weed-whacker, to untangle the threads, rescue the Senator, and deliver the planet Tree from itself.